when I was 10. I forgot where my front door key was and couldn’t get into the house. Panic set in. Checked all my pockets. School satchel, all the usual places. No key. I just had to sit it out. Two hours later my mother arrived and I confessed to losing my key. Next day she found it. In the pocket of my sports shorts. I’d obviously put it in there for safe keeping rather than leave it in the changing room. In my hurry to get home I’d completely forgotten where I’d put the key.

Roll the clock forward nearly 60 years and a similar thing happened to me. Couldn’t remember where I’d put my door key. The only difference this time was I wanted to go out and couldn’t lock the door behind me. Looked everywhere. No key. I did eventually find it (more about that later), but worryingly I found myself asking the question “was I just forgetful or is it the onset of dementia?”

When I was 10 I’d never heard of dementia, true my Nan was a bit doolally but the family put that down to having 13 kids and too much Tonic Wine. It was just a fact of life and we all mucked in, lent a hand and had a good laugh. “Ooooo what’s she done now?” was a favourite opening remark between my aunts.

These days, care of the elderly and dementia is front page news. Over the age of 65 and one in 14 risk developing it. Over the age of 80 and it’s one in six. In the UK it’s estimated 850,000 people are living with dementia. It’s the leading cause of death for women and the second leading cause for men. And, sadly, it is the only condition in the top 10 causes of death without a treatment to prevent, cure or slow its progression when it takes its deadly grip. (Source: www.dementiastatistics.org).

My father, who lived to the ripe old age of 93, had a very pragmatic view of life. “When you hit 65” he told me, “you enter the UXB zone”. For him it was the “Unexploded Bomb” time of life. You knew what might happen, but not if it actually would and when. Sure he would forget things occasionally, but as my Good Lady often remarked “at least he’s got all his marbles”.

So there was, in his case, a clear distinction between the normal forgetting of things and dementia. For some people however, the onset of dementia in the family is a worrying concern. More useful information and support can be found at the Alzheimer’s Society website.

Having experienced first hand living with somebody who aged without dementia and somebody who sadly did not, I decided to dig a little deeper into the subject. So what is this untreatable demon in our midst? Is there really nothing we can do about it? Is forgetting something the onset of dementia or just normal forgetfulness?

Alzheimer’s is thought to be caused by abnormal deposits of protein in the brain.

Vascular dementia by problems with the blood supply to the brain. Nerve cells require oxygen and nutrients to survive. Restricted blood supply causes the cells to die.

Mixed dementia is where both Alzheimer’s and Vascular are in evidence.

Lewy-body is much less common but is related to Alzheimer’s and Parkinson’s Disease. Lewy bodies are tiny clumps of protein that develop inside nerve cells and prevent them communicating properly with other nerve cells.

Fronto-temporal is a rarer form of dementia.  Nerve cells in the frontal and temporal lobes die as a result of abnormal proteins inside the cells. 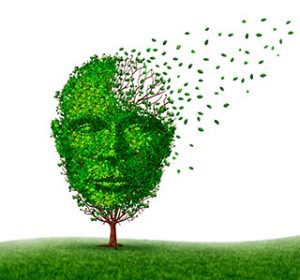 What to look out for

But how can we distinguish between the normal ageing process and the much more insidious onset of dementia?
Here’s NINE simple guidelines to help.

5) This is normal…
• Occasional difficulty finding the right word and knowing it
This is not…
• Frequent pauses trying to find a word, often giving up

7) This is normal…
• Can operate common appliances but sometimes a little unwilling to learn about new ones
This is not…
• Cannot operate simple appliances (e.g. Put the kettle on or make a phone call)

Sadly there is no cure for dementia but there a few things that can be done to help improve normal memory and promote a healthy brain.

• Exercise – moderate regular exercise of 150 minutes per week will deliver benefits to your body as well as your brain. Studies have shown that people who exercise regularly have better mental function than those who do not.

• Keep learning – engagement in mentally challenging activities keeps the brain in shape. Research has shown that people who engage in reading, writing, playing board games, playing musical instruments, and gardening have a lower risk of developing dementia in later life.

• Keep socially active – Researchers have found that the higher an individual’s social interaction, the better was their mental function.

Joining an exercise group like ours is the perfect brain-boosting activity!

Oh and I nearly forgot – I did find my door key, or rather my wife did. Rattling around the washing machine after it fell out of the pocket in my gym joggers. I knew I put it somewhere safe!

There are two videos published by the Alzheimer’s Society in our Video Resources
What is Alzheimer’s disease? and What is vascular dementia?

(Please remember if you are concerned about dementia, either for yourself or a member of your family, please take professional medical advice).